Diving with the Blue and Mako Sharks

Sometimes one manages to get oneself into a situation where, when one has a moment to stand back and think about it for second, one asks oneself how on earth one has managed to do so. Last Saturday was one of those days for me.

I have heard about diving with the Blue and Mako sharks before, but, with the price tag that comes attached to this adventure, I have never really considered it. I have also read an article about a diver diving with these sharks, in which the writer managed to scare me enough to decide to put this one on ice.

I had to get up at 4 in the morning to be in time for the launch, and it was as I was preparing my breakfast that the question came to me whether this breakfast here would be my last meal – not much of a last meal, a bowl of muesli. Not the type of thoughts you want to be having before embarking on the ultimate shark dive!

The mission for the day: We were to go out by boat to about 40 km’s south of Cape Point, where the continental shelf drops off, and the real deep water starts. The plan was to get to the correct spot, and to start chumming the water before we would get into the water ourselves to look for the Blue and Mako sharks. That’s right – we were actually going to be throwing blood and gore into the water before we got in ourselves – without a cage. Madness!

When we were about 20 km’s south of the Peninsula, still on our way out, I started to see a different world out there. There were quite a few birds out there, of types that we don’t see at the coast. Various types of Albatross were effortlessly hanging centimeters above the water (these birds can stay in the air for months on end), and a host of other species of birds were out hunting. Our skipper told us that these birds breed on the Marion Islands, and that they come up to here to hunt for food to feed the little chicks back down south. 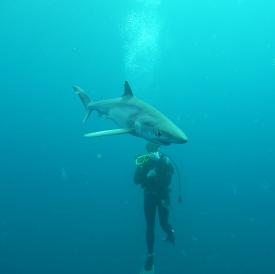 After about 40 km’s, our skipper decided that the water looked right, and we started chumming. Quite quickly the call came that a shark was spotted, and we kitted up to get into the water. At this point, the sea was about 1 kilometer deep. I helped some other divers get into the water, and then it was my turn. I had secretly made plans in my head about how to avoid becoming shark food –  I thought that I would hang in the middle of the group, I decided not to wear my bright orange fins, so that I wouldn’t attract attention, and I thought that I would be the one to get out 1st…

And then I rolled over backwards into one of the best experiences of my life.

You descend, and there is nothing below you. Below you is the bluest blue that you have ever seen – it is such a blue that you feel it, as much as you see it. The water out here was crystal clear (about 30m viz), and it was a warm 18 degrees. This is the thing that struck me the most – hanging suspended above the deep blue below you. It was beautiful.

From the moment I descended, I had lost all fear, and I was truly loving the whole experience. We had probably about 10 Blue Sharks that joined us in the water, and every now and again a tuna would swim by hurriedly as well. I never thought I would see a tuna!

The Blue Sharks were extremely inquisitive, even to the point where you have to push them out of your face, in the same way that you would push a dog away that keeps on licking you. Make no mistake, these are sharks, not puppies, but I never got the feeling that there was any real danger. 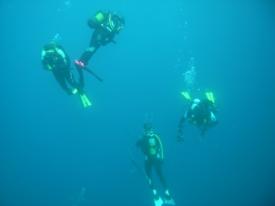 We also had an elusive Mako Shark join us. The Mako Shark looks a lot more menacing than the Blue Shark, and is related to the Great White. While the Blue Sharks were around us and in our faces all the time, the Mako kept its distance. I only saw it twice, quickly cutting through our group of divers, and then it was gone.

An hour and a bit later, I found myself being the only scuba diver left in the water, with our guide free diving down every now and again to join me. It was at this moment where my scuba diving experience came full circle. Hanging there, suspended in the water with the deep blue stretching out below me, on my own, was one of the most exhilarating moments of my life. It was a strange mix of awe, of peace, and of freedom. This was it. This is what I had in mind as a child when I imagined what scuba diving would be like. This is what I was looking for when I signed up for my Open Water Course. This was it.

What have others said about Into the Blue Scuba Dive Center?

Great people! - We went diving a couple of times with...
Into the Blue and had a great time. The crew was really friendly and professional and took care of all everything like driving us to the dive sites and back, washing the diving gear and changing the cylinders and we almost felt bad not having to do anything. Will definitely recommend them to anyone wanting to dive in Cape Town.
read more...

Super and very professional setup. Glad I was able to dive...

with them and would not only recommend diving here, but look forward to the next trip to dive with again.

Always good to dive with...

people who are professional and know what they are doing