In the old days Cape Town used to be called the Cape of Storms due to its reputation for fierce storms that made sailing these waters dangerous. This coupled with the fact that Cape Town was a key port on the spice route to India (before the construction of the Suez Canal) meant that a fair amount of ships have met their end in Cape waters. 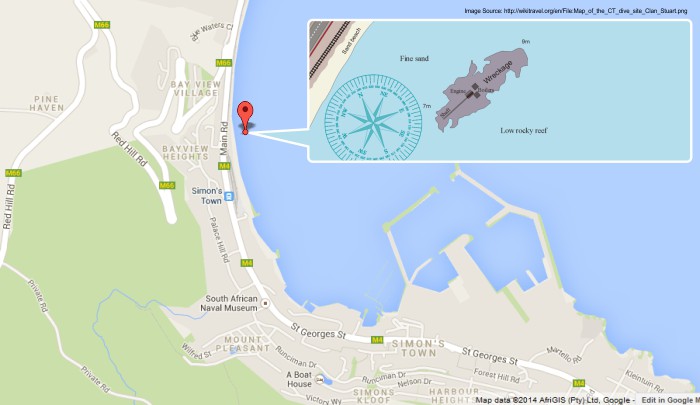 This is of course great for scuba diving and with more than 800 shipwrecks strewn along the Cape coastline divers are spoilt for choice with a wide variety of scuba dive sites to choose from.

The SS Clan Stuart is one of the more popular shipwrecks in Cape Town for beginners. Scuba diving this wreck is relatively easy  with a wide variety of underwater fauna and flora to see. This shipwreck is situated about 100 meters off Mackerel beach in Simons Town  and is easily accessible from the shore. There is ample parking next to the main road and with a short walk over some train tracks and down onto the beach you are ready to go scuba diving.

Simons Town is located in False Bay and the water temperature is relatively warm when compared to scuba diving in the Atlantic  Ocean on the other side of Cape Town. Temperatures range from 12deg to 22deg Celsius (53.6 - 71.6 deg Fahrenheit ) depending on the time of year and dive conditions.  Gloves are therefore optional and for most divers a 5mm suit will suffice.  The viz varies depending on conditions but for the most part is between 5-10 meters. Our dive masters are quite apt at reading the Cape Town dive conditions and will be able to judge from shore if the conditions are suitable for scuba diving.

Since the wreck is quite well protected from the South Westerly swells of the Cape, the shore entry is for the most part quite easy. This wreck is relatively close to the shore so a medium to strong surge is not uncommon. Dive depth averages at about 7m with deepest point at about 9m.

This wreck is not suitable for penetration as it has suffered extensive damage from the sea over the years. Most of the ship has been reclaimed by the sea with the ribs of the ship barely being visible. The crankshaft, connecting rods and propeller shaft with a large cast iron propeller is still visible.

The wreck has formed a manmade reef, alive with a variety of marine fauna and flora which makes scuba diving on it worthwhile. Scuba divers usually see various types of Squids and Cuttlefish, smaller Rays (like the Electric Ray) as well as a variety of fish. Pyjama and Shy Sharks are also sighted from time to time.  The growth inside the wreck comprises  more corals and bryozoans on the inside than the outside, which is covered predominantly by Red Bait and Coralline Algae.

The SS Clan Stuart Wreck is quite old now since it was scuttled in 1914. The ship was a freight vessel that had a rather unusual build for its time. At that time the Suez Canal was taxing ships heavily based on the breadth of the beam. The ship builders W Doxford and Son built the ship with a hull that bulged out just below the water line with only a narrow portion of the ship visible above water to reduce the amount of tax payable for making use of the Suez Canal. Unfortunately this design made piloting the ship much more difficult.

On 21 November 1914 the SS Clan Stuart was in Cape Town carrying a load of coal and was anchored in False Bay. Around 2am a strong South Easterly wind came up over the bay. It caught the captain unawares and blew the ship to shore where it ran hard aground near Glen Cairn Beach, Simons Town. Fortunately both the cargo and crew was salvaged and it was initially thought that repairs could be made. This however did not happen and after 4 months of trying to float the ship it was eventually scuttled. Currently only the engine block can be seen from the shore with the deck house having been removed and taken to the Glen Cairn Hotel.

All in all the SS Clan Stuart is excellent for scuba diving and is well worth pursuing. Easy access to this dive site as well as the relative shallow location of the wreck makes this an excellent scuba diving site for beginners.

No one has commented on this page yet.

What have others said about Into the Blue Scuba Dive Center?

Incredible - I am so happy I chose this dive company...

to go with for our 2 dives in Cape Town, it was unforgettable.

We got picked up from our hotel on time, (thank you) and we took a small boat out to the dive site. Very bumpy but high winds made for rough seas. The first dive to the wreck was great, COLD but great visibility. Break for a small snack and water, then second dive with the seals an hour later. It was incredible to say the least, and run by professionals. I took many videos and photos, but from most experiences, you need to put the camera down and just ENJOY IT. So exhausted but so happy. The crew were amazing and hard workers, I can't say enough good things. Thank you for a great experience and unforgettable memories!!

Super and very professional setup. Glad I was able to dive...

with them and would not only recommend diving here, but look forward to the next trip to dive with again.

I've been doing a scuba course with these guys, and am very impressed...

with the level of personal attention and professionalism. The staff are all warm, friendly and patient. I would highly recommend Into the Blue.